Well, I really buckled down during January in my attempt to Detox (as discussed here). My goals were two-fold: Stop drinking Diet Coke and attempt 30 workouts in 31 days.

I'm proud to report that the Diet Coke experiment was a success. I haven't had a single Diet Coke the entire month. I wonder if I had any effect on this:

As for the 30 workouts, well, I didn't quite get there. Still, 20 workouts in 31 days was pretty good. I slowed down at the end of the month for some reason, but my early momentum gave me the confidence to try something new. I signed up for and ran a 10K in Orinda, CA called The Dam Run. I even posted a pic of the starting point on Twitter. 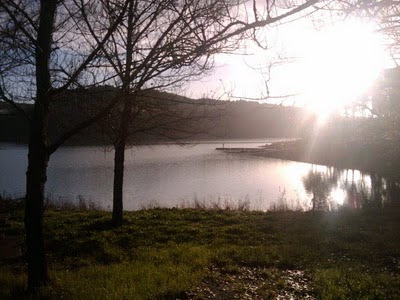 My time was terrible, but I finished and I wasn't last. The course was cross county, which was new for me. All my previous races have been on pavement. This one took us though single track trails, across soggy meadows and up huge hills. Seriously, I'm talking about hands on the knees, walking and grunting hills. The good news is that the 3.1 mile turn around point was much higher than the starting point, so most of the run back was downhill.

There was another factor contributing to my slow time. Since I gave up Diet Coke, I substituted a lot of sugar drinks. Even though I worked out quite a bit, my weight has actually gone up. I'm not too worried about it. My plan for February is to continue with the same plan. The absence of Diet Coke wasn't as hard as I thought. Now I just need to imbibe more carefully.

I'm Registered - Why Aren't You?

I have registered to play in the PokerStars World Blogger Championship of Online Poker! This PokerStars tournament is a No Limit Texas Hold’em event exclusive to Bloggers, you too can take part by registering on WBCOOP

Stack - Part II (the one with math) 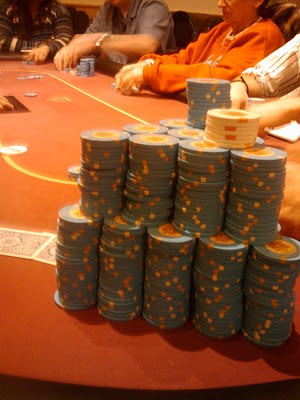 MHG challenges his readers occasionally with math problems. This one should be easy. In this picture from my Stack and a Story post, how much do I have? The blue chips are $2 and the white chips are $1. You should be able to give an exact amount, even with this limited information.
Winner gets the stack.*
*Well, maybe just an autographed picture of the stack. It's all I have left anyway.
Posted by DrChako at 4:04 PM 7 comments: