I really hadn’t intended on posting another blog until I got to Iraq, but this is way too cool. To celebrate my last good meal, my wife and I decided to go to our favorite restaurant in Washington – Daniel’s Broiler. It sits on the southern tip of Lake Union and has incredible views of enormous boats and beautiful homes. The food is always outstanding and their wine selection can’t be beat. I had a Red Diamond Cabernet and my wife had an Argentinean wine called a Malbeck (Malback?). It reminder her of a cab without the oak and it left a slight aftertaste that hinted of candy. Amazing.

Before the meal we sat at the bar. I had a Manhattan and my wife had a fruity drink with cranberry, pineapple and vanilla vodka. The piano player was out of this world. I requested Scenes from an Italian Restaurant and he knocked it out of the park.

The meal. Wow. Filet and lobster tail with asparagus and mushrooms. The mashed potatoes by themselves were worth the trip. Then came the first surprise – champagne and strawberries dipped in chocolate. We didn’t request desert, but it was really nice. I told them when I made the reservation that is was a special night.

Surprise #2 blew me away. We met with the manager, who knew that this was where I chose to have my last meal before leaving for Iraq. He thanked me for my service to our country in words and deeds.

That’s right – the whole thing was free. It was his way of thanking me and I was speechless. We overtipped our waiter, the piano player and the valet, of course. I just want to say a hearty THANK YOU to the folks at Daniel’s Broiler. Go there if you are ever in town.
Posted by DrChako at 11:12 AM 3 comments:

I Wonder if He Left Already?

Nope folks, I’m still here. Sorry for the lack of posting, but it turns out there is a lot to do before you go to Iraq. I got all my shots this week. The Anthrax shot hurts like a bitch. There are actually 5 more Anthrax shots in my near future, too.

I updated my Will and completed 8 different general and special Powers of Attorney for my wife and family. I checked my glasses (it will be weird not wearing contacts – strictly verboten), and made sure I have special glasses that go into my gas mask, should the need arise.

This was strange. I had to fill out a form that gives someone information on my background like where I went to high school and what the mascot was. This presumably makes it easier to locate me if I’m captured. I even needed to come up with a “stress word.” I use it if I’m captured and unable to tell someone I’m under duress. I’m supposed to work it into casual conversation. It feels very James Bond. I have very strong doubts that the people who are attempting to free me will know where to find this information.

Now comes the hard part. My family is taking me to the airport in Seattle Friday morning. Goodbyes are tough. Thank goodness for my new webcam!
Posted by DrChako at 8:31 AM 12 comments:

Sorry for the lack of posting. Things have been busy as I prepare to depart for Iraq. My son turned 10 today (Harry Chapin anyone?). When asked what he was getting for his birthday, he replied, “A Brazilian.” 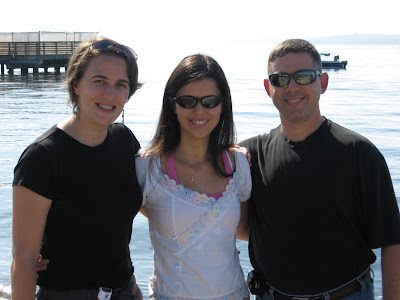 Happy birthday, son. I will think of this great day a lot when I’m “downrange.” 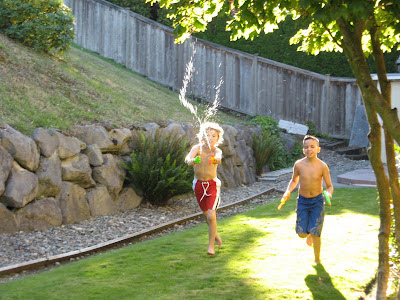 Who Are the People in Your Neighborhood?

I grew up with Mr. Rogers, and I can still hear him singing this ditty. I was singing it tonight in the casino as I waited to hear if my name was drawn for the $5000 per hour give away to frequent poker players (I wasn’t called). Here are the people in my neighborhood (the Muckleshoot casino).

This guy was about 50, black and had an unlit cigarette jutting straight out from his lips. He was just coming into the casino as I was leaving and it was obvious that the lights and sounds triggered the correct Pavlovian response in his brain. He was home.

This was a white female with big hair in her mid-50s. What struck was that she was crying while coming INTO the casino from the parking lot. Away demons!

This was the 20-something who was railbirding her boyfriend for the last 3 hours. She finally thought they were done, but as her tattooed honey was reaching for his 5th re-buy, she stormed out of the poker room. Play halted at every table she passed so the players could stare at her gloriousness. Remember guys, no matter how hot she is, someone, somewhere thinks she’s a bitch.

Okay. This one was Ryan in his new role as floor walker. It’s actually a pay cut from dealing, but if that’s the price you pay to become a full-time dealer, so be it. I’m still waiting on some killer blog posts about your new role. Any good fights?

In a poker room? Is this possible? Actually, it is. Most dealers and many players know me and my story quite well. Tonight as I talked with Peter, Ryan, Heather (she’ll always be “Triple-H” to me), Mary, Dave and Judy I realized that good people are everywhere. They all wished me good luck and a safe return from Iraq.

Here’s hoping their wishes come true.
Posted by DrChako at 12:37 AM 4 comments:

Fill in your Own Bad Beat Ending

First off, my last day of work was Friday. They put together a really nice pot luck and a lot of people said some really nice things about me. I was pretty overwhelmed. I didn’t get choked up like I’ve seen others do, but I did feel the gravity of the event.

I hope to continue blogging as I prepare to deploy to Iraq, and even when I get there. For now, I leave you with a cleverly disguised bad beat story.

He turns over K 3 for king-high.

How did I get knocked out? I’ll tell you he didn’t spike a king or get running 3s.
Posted by DrChako at 8:16 AM 4 comments:

HOPS and Hops and Closing Shop

I apologize for the title of this post. It made sense to me. Let’s see if I can make it make sense to you.

I was driving into work this morning and the announcer on NPR said there was a story coming up about how most hops in America originated in the Northwest. My military mind immediately thought of Air Force hops that take government personnel around the world at a discounted rate. When I found out the story was actually about beer, I laughed out loud.

You see, that’s how my mind is programmed. I’ve been in the military for almost 21 years. I don’t really even remember life “on the outside.”

That’s why today is so interesting and emotional. Today is my last day of work at Madigan Army Medical Center in Tacoma, Washington. I’m taking a couple days off before I start outprocessing (another military term) in preparation to go to Baghdad. As I’ve noted before, as soon as I get back from Iraq, I’ll begin outprocessing again – this time to get out of the Army for good.

I wonder how I’ll feel at this time next year when I’m no longer in the Army.
Posted by DrChako at 7:15 AM 2 comments:

Penn and Teller Prove the Existence of Sheep

Watch this video. I totally would have signed. Not because I don’t know what the substance is (I AM a physician after all), but the petitioner is totally hot.

For my RSS readers, here is the link:

Editors Note: It's a sad day folks. That lying cheat Barry Bonds broke the home run record. This is just one more reason why I am boycotting Major League Baseball. The world is looking at us, folks.

"Cheat to win." That's the message.

An actual hand history. I’m pretty sure you won’t see this one on other blogs.

It’s 15/30 and an extremely loose table. 5 and 6 way action is the norm. The pattern is an early raise and multiple callers.

UTG, you look down at As-Jc. Not a great hand, so I can certainly understand the argument to throw this away, especially at this table. Figuring it’s the best hand, you raise to $30.

But wait! You totally forgot that this is a kill-pot. This next hand is 30/60, so all you did was call. Moron.

Now the table kicks into high gear. You get re-raised by a tight player and capped by the loosest player at the table. 3 more callers (all calling $240 cold!), and it gets back to you. You have to call three more bets here to see a flop ($180).

What do you do?

I’ve driven over this bridge a few times and never gave it a second thought.

My thoughts are with the unfortunate drivers now.

Thanks to conphoto for the great shots. 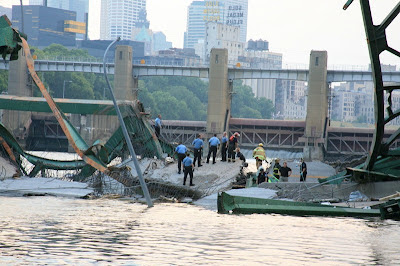