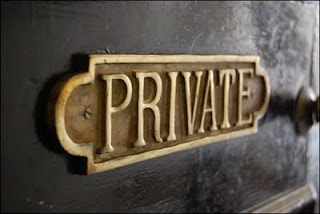 So, you all know I took this blog private. Before I did so, I subscribed to my own blog so I could read it through my Google Reader. It let me do one final edit in case I needed to make small changes before it was read by the masses. Now it doesn't show up there anymore. I'm fairly certain it's because of the privacy thing.

1. Can you see my blog in your reader (if you use one) now that it's private?

2. Is there something I can do to make my blog more accessible to those who like to read my drivel (without changing the privacy status)?
Posted by DrChako at 1:28 PM 11 comments:

Well, I've calmed down a bit and learned a little something, too. First of all, I found the offending picture. I posted it to Facebook back in mid 2010 and you know what? I can actually understand why my boss was upset. Don't bother looking for it - I deleted it.*

Bottom line - I made a mistake. I should not have posted the picture and I am appropriately chastised. I'm still kicking myself for being that stupid, in fact. Let this be a lesson to you.

But here's the other thing. There was only one person in my office that I "friended" on Facebook. I unfriended him sometime last year. Here's what must have happened. He saw the picture last year and must have saved it to his computer "just in case." He and I had a run-in a few weeks ago, and in a case of revenge disguised as "just trying to help," he went straight to my boss to show him the pic.

It gets even funnier (or sadder, depending on your perspective). My boss, who is in his 60s, is not quite tech-savvy. He said that he won't tell me who showed him the picture. He also wanted me to know that he checks on all of my "social network activity" all the time, just to be on the safe side.

I'm glad he doesn't understand technology, and I have no intention of disavowing him of his ruse. I promised to be careful, and you know what? I will be careful.

I'll be careful of what I post from now on, and I'll be doubly careful of that fucking rat bastard in my office.

*Actually, if we're friends on Facebook, go ahead and try to find it. I've always wondered if deleting pictures actually makes them go away - especially if there were multiple commentors. You may remember it - it was a picture of someone's arm with an offensive tattoo. There was some unintentional (and potentially identifiable) stuff in the background.
Posted by DrChako at 10:36 PM 2 comments:

Editors Note: My humble apologies if you were spammed by an invitation to this blog. I'm a noob when it comes to this stuff and in my panic to take things down, I may have clicked,  "Invite"' a few times too many. Please forgive.


You ever been so mad your hands were shaking? The kind of mad where it's even hard to type? Yeah, that's me now.

I'm a fairly smart guy. I've been very good about keeping my personal life separate from my work life. That includes social media. Well, today I got an angry message from my boss saying he "found" a picture of him that I posted on some social media site. He was very upset and wanted it taken down immediately. For the life of me, I could not find it, despite searching for the last 2 hours. It seems my only recourse is to delete the lot - blog, facebook and twitter.

I'm reminded of a young doctor I mentored when I was teaching. He got into some serious trouble for blogging. Granted, he said something he shouldn't have and it got to the wrong person, but it was blown way out of proportion. As a blogger, they called me to evaluate the situation and I was able to keep the young man out of jail (seriously), but his punishment was quite severe.

I thought I was smarter than that. Apparently not. I'd say more, but I'm fairly certain there's a rat out there. Instead, allow me to offer the following blanket statement:

This blog and all of it's contents are for entertainment purposes only. No person, named or not, is real. I made them all up. If anyone was offended, I offer my sincere apologies. Please direct me to any offending posts and I will do what I can to delete them.

If there are any lawyer types out there who can offer advice about how to make the above statement more official-like, please let me know.