Our uncle Jerry died today. One of the finest human beings on the planet. He was in his early 50's. Melanoma.

Hug your loved one and give some love to The Wife if you get the chance.

Prepare for the Ice Age!

Many of you already get the quote of the day on your Google frontpage, so you've already seen this one. It very appropriate for most (if not all) of my readers, especially those of you who are already dreaming of Vegas (just a few months away!).

Things here have been good, all things considered. On the bad side, we are losing our Au Pair due to some very unfortunate personal circumstances on her end. We've been so lucky with our three Au Pairs. I hope our next one is just as good. The Wife just got off the phone with a young French girl who's current family is demanding a rematch (meaning they are firing her). I'm a little nervous about that history, but we're pretty easy going. Unless she beats the kids*, she'll probably do fine.

We flew our oldest son's best friend down to California as a birthday present. It's been awesome so far. Our oldest had school yesterday, so instead of having his buddy just sit around the house all day, I took him with me to the golf course. I showed him the finer points of carrying my bag, and voila, I had a caddy! I had to help him a few times ("Dr. Chako, why is my head pounding?"), but he did great. I even paid him for his efforts, much to the consternation of my son. Maybe he'll be so jealous that I'll have a permanent caddy from now on. Why else have kids? 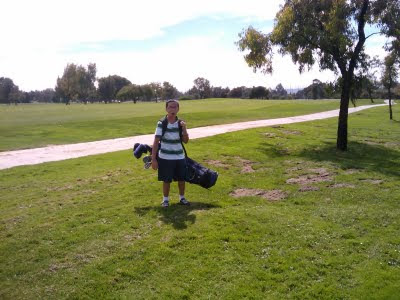 I shot an 88, but at one point I had 5 pars in 6 holes. This was only my second round of the year, so I'm pretty happy about that. Had one drive of 280 yards and 4 legit chances at birdie puts. Bring on Vegas!

Blaargh! is the Greatest Comedian of All Time!

If you aren't reading Poker Blaargh!, you're an idiot. I mean seriously, this guy may be the greatest comedian of all time. When I think of the greats; Bill Cosby, George Carlin, Eddie Murphy, Sam Kineson, now I will add Blaargh to the list - right at the top.

For those who may be a little lost, I refer you to the Summer Bankroll Challenge. This started last year as a contest between MHG and myself to see who could build the bigger bankroll over a set period of time. We both failed miserably, but I failed worse and prostrated myself before the winner. This time we opened the challenge to anyone interested and had 7 runners. Beside pure BR building, we added prop bets. In one such bet, whoever made the funniest post won. I crafted a dialogue post that even made me laugh while I was writing it, but it was no match for the awesomeness of this YouTube video.

I was thinking of something pithy to say (because my ego still thinks my post was funnier), but damn, that video cracked me up. It was so good in fact, that I was certain he just pasted someone elses video just to win the bet. It was only on the 3rd viewing that I heard the narrator start out by saying, "This is Blaargh."

Not a shred of evidence exists in favor of the idea that life is serious.
- Brendan Gill

Sorry I haven't posted in a while. (Am I the first person to apologize for lack of posting? I think so). I just had to share this quote. Lately I've been accused (several times, in fact), of being eternally happy. I've been eating Koibito at lunch and Sun, the lovely sushi maker, always greets me with a smile and asks me how I'm doing. I give the standard reply, "Excellent!" The other day, I switched to "Very good." She asked me how come I'm not excellent? Something must be wrong.

I've been on a good run in poker and in life. I've got a great job and a wonderful family. The other day I received a wonderful gift from my sister. She sent me my School Days books from when I was in grade school, complete with pics. I was a cute kid, although I remember thinking I was ugly with huge ears. It was an interesting time in my life and I have fond memories, mostly of my dad, from around that time. When I posted some of the pics on Facebook, a ton of folks from my youth commented and it made me feel great.

Despite the fact that I'm missing my family terribly, I know this is only temporary and I'll be with them soon. This Thursday in fact. Not soon after that it will be permanent, I'm sure. In the mean time, as I posted on Twitter, life is pretty grand when you are sitting with a full house and not one, not two, but three people push All-in into you. In a cash game.
Posted by DrChako at 11:38 PM 3 comments:

"May you live in interesting times." - Chinese Curse (more here on Wikipedia)

Life has been pretty topsy turvy lately (as an aside, how come we don't use "turvy" in every day speech. Work on that). Here is just a little of what I've been up to: 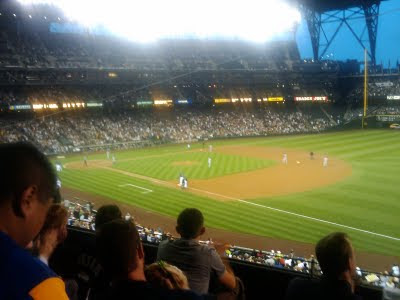 Despite my boycott of MLB (going strong since 1994), the chance to see Dr. Pauly and the lovely Change 100 was too much. Please enjoy this rare shot of me at an actual major league baseball game. I half thought I'd spend the entire time with my back to the game in protest, but the seats weren't amenable. I also thought about purchasing time on the jumbotron with a note saying that I'm still waiting for my apology for 1994, but that would mean more $$ for baseball, and that ain't gonna happen. 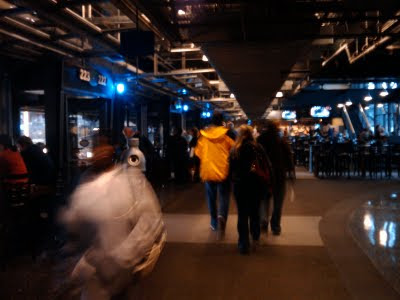 We had amazing seats in the Terrace area down the 1st baseline courtesy of the great Brandon Schaefer. It was cool meeting you, dude. I hope to read more of your travels as you search for the elusive 8th continent. 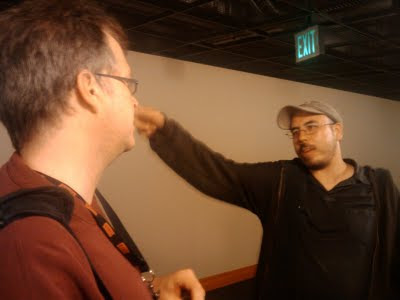 Not only did I get to hang with some of my favorite bloggers, but another semi-blogger happened to be working the stats that night. Here, Dr. Pauly is telling Zeem where to find the bathroom. Or maybe not. Too bad SeattleJohn couldn't make it out. Next time. 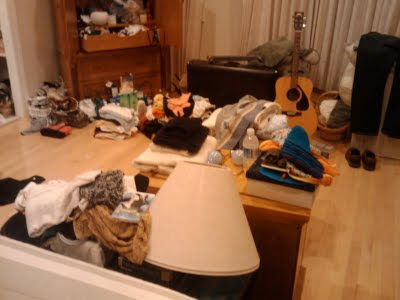 Last Thursday, I packed the whole family (dog included) into the van and drove 14 hours straight to Palo Alto, CA. We got there just in time for the moving van to arrive and dump all my stuff in our new bedroom. The place is amazing. Thanks again, honey. You done good. 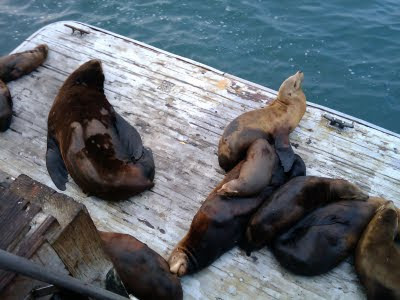 Of course, we had to do some touristy stuff and took everyone down to see the harbor seals. They didn't disappoint, although the highlight for me was driving along Highway 17. I can't wait to do it in the convertible.
Posted by DrChako at 9:02 AM 3 comments: 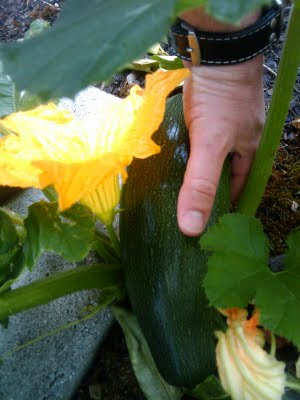 This is the zucchini picture I tried to post yesterday, but couldn't figure out how to do it from my new MyTouch phone (which is otherwise awesome). It's growing in my California backyard and it's going to make it into a salad in the near future.

Siting here in California amidst boxes. This place is amazing. Zucchini is ripe!
Posted by DrChako at 7:58 AM 5 comments:

Demetrai was on a heater. We were playing 4/8 at the Muckleshoot while I was waiting on a seat in the stupid 3/5 spread game. Other than a huge suckout on the first hand when I made my straight on the river against his trips, he had my number. I had Aces; he stayed with K3 and flopped trips. I flopped a set; he rivered a straight. The worst was when I had Ac-8c. Four of us see a flop of 9-9-9. I don't like it, but I imagine no one else does. It checks to me and I take a stab. Demetrai raises from the button. Okay, he's got a small pocket pair for the full house. Easy muck for me. One non-believer takes him to the river where he shows his FLOPPED QUADS.

Yes folks, not only was he on a heater, but he was a moron as well. Who the hell raises quads on the flop? (Demetrai, that's who).

Well, I was feeling lucky too. Sure enough, two hands later and I raise from the BB with JJ. The flop is 8h-9h-Jc. I don't like my top set with this draw-happy table so I bet out. 4 callers and I get a turn of Js. I bet out again hoping no one believes and sure enough they all call. Unfortunately the river does not fill any straights or flushes, so when I bet out, no one calls. Fine by me because not only do I win a big pot, but there were 2 minutes left on the high hand (previously owned by Demetrai). $250, thankyouverymuch.

Now I get called to the 3/5 game. I half thought I should go home (I hear The Wife screaming YES!), but it was early. I proceed to lose a big pot on a stupid hand. Two hands later I pick up AA. I raise to $20 and an honest producer calls me. He was an absolute ATM and by the end of the night, he donated over $1000 to that game.

That's right, baby. Even I can hit a two-outer now and then. From there I didn't look back and ran over the table, causing (or at least contributing) to it's eventual break up.

Variance is definately on my side these days. Let's hope it lasts a little longer. This is fun.
Posted by DrChako at 1:54 AM 4 comments: