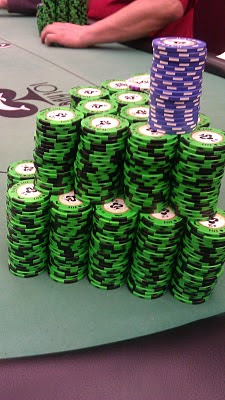 I last wrote about the 8/16 game at Bay 101 after a killer session where I cashed out 12 racks. This session wasn't quite as good (only 9 racks), but this time it was on my original buy-in. I was a bit of a card rack. I'm guessing I flopped a set about 50% of the time I held a pocket pair, and I netted a huge pot with pocket 6s on a board of QQ44 when I got called all the way with Ace high. On the flip side, I got my KJ-high snapped when my tilty victim called with KQ-high. It was a ballsy call and I congratulated him for it. He was on his 5th $200 buy-in and soon dumped all those chips back to me. I almost took a picture of him standing at the table looking at his last ATM receipt to see if he had enough for another hit, but I wasn't fast enough.

The other day I posted a picture on Twitter of a large gentleman with "Sticks & Stones" tattooed on his arm. I left the pithy comment: "I'm told THIS can break your bones." I'm certain it was true. The dude was huge. Unfortunately, when I went to snap the picture, I forgot to turn off the flash on my phone, and he was all, "WTF, dude?!" I quickly recovered and showed him the neat flashlight feature of my phone and apologized for the accident, but it was sketchy for a bit. I thought I was going to be testing the whole bone-breaking feature of his forearm, and that was not what I had planned for my Monday night.

Back to the Bay 101 - I really tried hard to put folks on hands and was able to loosen my starting hands quite a bit. Still, it's a bit of a crap shoot when there are 5 or 6 to see every flop. I got a huge kick out of the fact that a couple dealers stopped by after their down to check on my progress. It's nice to book a win.
Posted by DrChako at 10:16 PM 3 comments:

I have strange dreams. I woke up this morning certain that a blogger was arrested. It bugged me so much I was certain it was true. So a quick search of Twitter, Facebook and my G-Reader revealed no such arrests. Then I got to thinking - who would be the most plausible arrestee?

Which of these headlines is most believable?

There are many other logical choices, but I think these four represent the four corners of our blogging universe. If any of them were actually arrested, it would likely be for widely different reasons. It's kinda fun to think what they might be.
Posted by DrChako at 9:59 PM 10 comments:

Bammer convinced me to play a stud tourney tonight. Here is my first hand. 8s was good here, right? 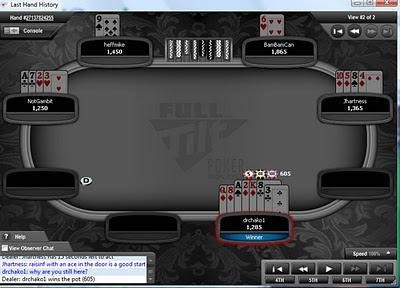