Are you ready for the big finale? Here it is!

I bought a Ferrari.
Let that roll around in your head for a while. While it's percolating, you wanna see it? Here it is: 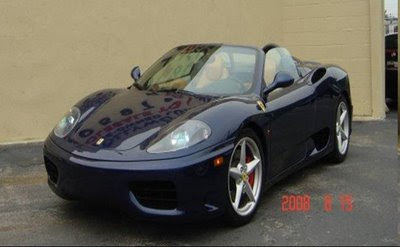 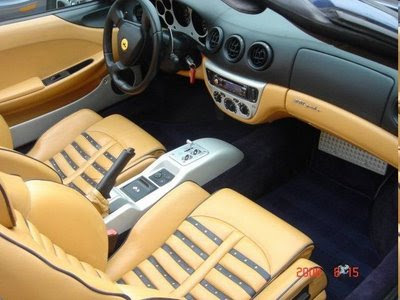 Beautiful isn't it?
I love the interior. I love the exterior. This car is the culmination of my lifelong dream. I feel like I should be standing on a podium accepting it as an award. "I'd like to thank all the people that made this possible," I would say.

At this point, I imagine your reactions are varied. If you are a guy, you might be thinking, "Good for you! I'd do it if I had the means." Others amongst you are sadly shaking your heads and thinking, "Hasn't he heard about the economy? Doesn't he know people are losing their jobs left and right? How callous can he be?!"If you are married to me, you now have confirmation that your husband is, in fact, an idiot. You also are looking at real estate because one of us might have to move out (not as far from reality as you might think). And finally, at least one of you has proposed marriage. At this point in time, I'm still taken, but check back in a little while.

Now, before you write me off completely, here comes The Rest of the Story. The car was aggressively priced. They are still expensive, but this one was about $10K below market. Of course, I insisted on an independent pre-purchase inspection (PPI) from a reputable dealer. It turns out that these PPI places are few and far between in the outback of Alabama, where the car was located. I found a place called Hesco in Birmingham. I can't say enough good things about these guys. They were up front that they didn't work on a lot of Ferraris, but they'd do their best. Here is a short list of what they found:
Some of these are known issues with this model Ferrari (the 360 F1 Spider), but it all adds up to make this car even more expensive than one in good repair. End result? No Ferrari. At least not right now.

It would be an understatement of epic proportions to say that The Wife is relieved. At the very least, she doesn't have to kick me to the curb (at least not yet). If we buy real estate it will be as an investment, not as a place for me to move into. We also don't have to park one of our cars in the driveway, which would have been necessary with a 4th car.

This was the right decision, for many reasons. For now, the dream of ownership remains just that - a dream. For one shining moment, I was a Ferrari owner. I will be again, some day. Hopefully, I'll be able to hang on to all the other great things in my life, too.
Posted by DrChako at 3:02 PM

Thanks for a fun ride! Loved the series.

You are better off considering the repairs needed. It sounds like the previous owner beat the shit out of the car. I thought there is a new Ferrari dealership in Seattle. Have you checked it out? Also, there is one in Portland.

I actually got as far as, "may need a new clutch" before I started dialing your number, to say tell me you haven't bought it yet!!

She does have great lines though, I'll give you that. But I think you're still doing OK with The Wife's lines..........

At least you have a dream to accomplish still.. If you bought it then your life long dream for a car would be over.

The day will come again.

Do you have the cool Ferrari leather jacket?

Dude, just get an older one. You can pick them up for like $35k. It's sitll a Ferrari. If you really want a newer email me. There are tons of them avaiable in Calif right now. You just have to know who to call.

Have not seen you in a while. If you just want to drive fast for a bit and have fun before you buy a car, I will let you drive my car, its faster than most of the ferraris on the road today anyway. Got it down to 0-60 in 3.9 now. Seattlejohn

Thank god guys still have mid-life crises or else this economy would really be fucked. Hope you find the real car of your dreams before the first quarter is over - the U.S. gross domestic product needs all the help it can get right now.