If you can believe it, I actually stopped driving the Ferrari long enough to play a little poker. I had Wednesday off (don't all doctors have Wednesdays off?) so I decided to head down to Bay 101 for their Thursday morning special. It's a spread limit tournament (although I never saw anyone capped by the limit. It was basically no-limit). It's an $80 buy-in plus $40 add-on. What I didn't know was that it's a $40 re-buy tournament. I hadn't planned on rebuying, so I had to play cautiously. I managed to make it through the rebuy period with exactly my starting stack of 1000 chips. Add on gave me an extra 2000 and away we went. One note about the blind structure. I was impressed. It was a 5 hour tournament. Blinds started at 25/50, but there was a 100/150 level and a 200/300 level. It went:

I thought that was more than fair.

I channeled The Wife and played uber-tight. Made some big laydowns and pushed a few hands toward the bubble when things got tight. That plan got me to the final table as the chip leader.

Everyone cheered when the 9 seat was finally busted. He was a first class asshole who was literally screaming for his draws to hit (and he never hesitated to get his chips in with a draw - even after the rebuy period). Of course he kept hitting his draws. At least is wasn't against me.

As is usual with these things, we made a deal at the final table so that everyone at least got their money back. The real cash started at 5th place, and that's exactly where I finished. Ran into aces if anyone cares. I played well, and I'm happy with my cash in the first live poker I've played since MHG and I stormed the casino in the mountains of Washington.

We will now return you to your regularly scheduled Ferrari updates, just as soon as it stops raining and I can take the cover off. 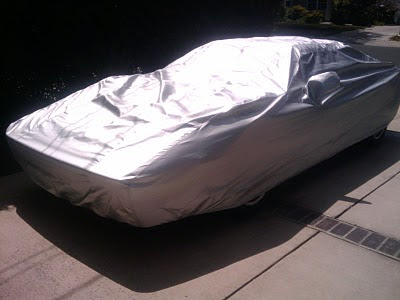 Wow, tailored, silver propholactic with the catch pool moved from the head to the river view mirror.

So, how much more than my car did the cover cost?

Does the wife know? Cash purchase I hope.

You are correct, Ken. It's custom made from Ricambi specifically for the Ferrari 328. It was a mere $175, and well worth it since I can't park the car in the garage until we clear out some space.

The Wife knows and approves. In fact, it was her idea!