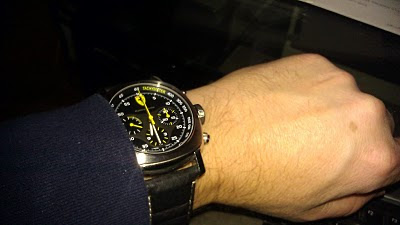 ***Since bequeathed to Drizz as my bust-out prize during the last WPBT. Still waiting on your visit so we can go busting through the Palo Alto hills, buddy.
Posted by DrChako at 10:15 PM

Awesome win doc! Too bad you didn't start your 21x run with your full buy in...

I remember when I first got my Audi that I had all these grand ideas of the Audi branded merchandise I was going to begin sporting. However, absolutely none of it came to pass. Mostly because I adore my car, but not a bunch of useless stuff that has the Audi name on it. The only thing I ever ended up buying was the front "license" plate for the car. Just the mirrored plate with the Audi rings. It was perfect.

The above comment from the guy who turned down discounted watches from the CEO of Tourneau has made me a little dizzy. I may need to sit down for a moment...

And YOU will be doing the driving, I don't trust myself with that much power and would just rather lean back to enjoy the ride.

Would that be the Panerai Scuderia?