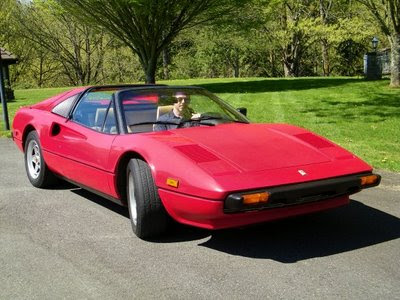 So once again, I'm back to being Ferrari-less. I'd like to leave you with a philosophical comment or some great life lesson that I learned here, but I'm just bummed.
Posted by DrChako at 9:12 AM

I never would have pegged you for a 308 kinda' guy.

A. Your now screwed as the wife knows the low point bid, and she can set a lower bar now.

B. Use the Pregnancy rules. Do not tell us about wonderful cars until your SURE the seed has taken. This is two miscarriages. Next time I want to hear AFTER you get it approved. :).

Hopefully the next time will take.

I keep pointing you to one in you wheelhouse:

Of course with the soul searching of recent times, this might help better:

'The Wife' pwned you on this one. She set the price point well.

Thanks KenP. The link to the toy Ferraris was great, but since they are listed in British Pounds, I'm not sure I can afford them. As for The Monk Who Sold His Ferrari, I can guarantee one thing. I won't read it. I'm afraid it might inspire me to give up the dream and go do something noble.

My brother, this one was just not meant to be. However, I believe with all my heart and soul that you and a Ferrari ARE meant to be. You can't want something so badly for your entire life and have it not happen eventually.

Subconscious said...
This comment has been removed by the author.
11:02 PM

Yes you can not have it happen eventually - like when your wife still doesn't have a job.