First, some actual poker content. I let The Wife play my free roll today in the BBT5. I watched for a while and she held her own. Unfortunately, she ran into some big hands early (which would have surely knocked me out) and in the later stages her pocket Queens did her in. I was proud of how she played and honestly don't think I could have done better.

So, I decided to take another run in the Ferrari up through the hills. My youngest had been itching for a longer ride, so we buckled him in the passenger seat and off we went. As he is wont to do, he fell asleep within 2 blocks. That's okay. I wasn't punching it. Once we got off the beaten path and into the twisties, it became my goal to wake him up.

I'm sure I was babying it a little since he's far more precious to me than the car (honest!) but darn it, that engine was singing. Wake up!

Once I got to the top of Old La Honda road, I really opened her up and his eyes popped right open. We were both laughing in the tight turns and outright yelling when I really punched it on the straights. He gets it now, I think.

Later on, I pulled into a local gas station to fill up. Unbelievably, another Ferrari pulled in just across from me. We both got out, looked at each other and said, "Nice car!" 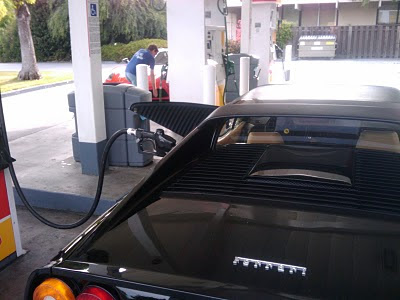 His was a beautiful 430 (16M version for those that care) and was worth easily 6x what mine is. We had a great chat while filling up and when he left, he punched it hard just for me. The sound was intoxicating.
Posted by DrChako at 7:24 PM

You're giving me more reasons to drag my ass up to the Bay Area, Doc.

Glad you're enjoying the ride.

I guess motorcycle lady KAT is into

I know but I couldn't resist.

I could seriously read nothing but Ferrari posts. I find this fascinating, and might try to duplicate it. More details on the chase of this particular 328 plskthxbi

Any volunteer to sit up the dollar pool for the first ticket?